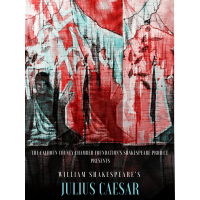 The intent of these performances is to complement the required reading curriculum of high school students reading the play and is meant to enhance their study of not only the work of Shakespeare, but theater and literature in general.

“I think it is a worthwhile project and will be a benefit to many of the local high schools,” JSU Drama Department Head Randy Blades said.

“Utah is well known for the arts, particularly the Shakespeare Festival at Southern Utah University, which is where Carrie went to school,” Duncan said. “While personally collaborating on a project for CAST, Carrie shared the idea to conduct a performance of Shakespeare’s works within our community. The conversation grew to include others, who reminisced about the Alabama Shakespeare Festival’s origins in Anniston, from 1972 until 1985.”

Colton pointed out that the project’s mission was to spotlight the accessibility of art.

“Emily and I went into it with the mission that art and access to professional art should not be saved for the elite or upper class,” she said. “Shakespeare himself was a playwright for the common man. ‘Julius Ceasar’ will be free of charge to both student and community in the hopes of bridging this artistic and economic gap.”

It was a natural fit since the Anniston Performing Arts Center at Anniston High School was built for the Shakespeare Festival.

“As the Tourism and Marketing director for the Chamber and Visitors Center, our work focuses on education, workforce development, marketing and community development, creating programs to enhance our schools and communities, and leverage businesses,” Duncan said. “’The Shakespeare Project’ was established to enhance the understanding of performing arts and literature by presenting free professional productions of classic works, including Shakespeare.”

Members of JSU’s faculty are participating as the director, performers and technical staff for the performance funded by grants and patron contributions. Plus, several JSU students will assist by serving as college interns for the production. The company will also rehearse in Stone Center and build scenery and costumes in the Drama Department shops before loading in to the Anniston Performing Arts Center.

“We knew from day one we needed to assemble a group that was already involved in the arts, so naturally, we reached out to JSU and Randy in the Drama Department, Knox Concert Series, CAST, members of the original Alabama Shakespeare Festival Boards, and many others,” Duncan said. “The Drama Department has been crucial to help us secure rehearsal and build space this summer in their facilities on campus, and whether referring to the English Department’s Dr. DiBiase and Mrs. Roe offering their educational and dramaturgical support or other departments volunteering to help any way they can. We’re grateful to have the university’s resources and assistance during this project.”

The production will also include professional actors coming from all over the country, including Los Angeles and New York.

“Shakespeare is incredibly difficult to perform and if the students of Anniston are going to benefit from the experience, we needed to bring in the professionals,” Colton said.

School performances will be August 15-17 and public performances are set for August 18-19. Performance times to be announced. Admission will be free, but donations will be accepted to fund future productions.

The endeavor also includes hosting an invitation-only two-day workshop for teachers that will be run by the American Shakespeare Center from Staunton, Virginia, in August. It will be open to area high school teachers to assist them in teaching the show and the life and history of Shakespeare in general.

This email address is being protected from spambots. You need JavaScript enabled to view it.